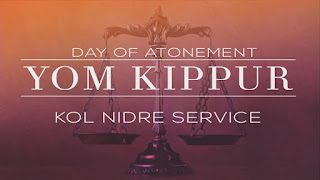 May I ask a small favor?

Please sit for ten minutes... that's all... just ten minutes on the day of Yom Kippur... and listen to this music.

It is the famous Kol Nidrei  piece played at just about every Jewish temple in the world after sundown on the evening before Yom Kippur, which translated to English means Day of Atonement.

There are a zillion recordings of this music... most often done with just a cello and piano... sometimes a violin as well. This version is nice because it is a full orchestra. It is a rather famous recording done in Rome in 1994 for the Pope. (More info is here: https://en.wikipedia.org/wiki/Papal_Concert_to_Commemorate_the_Shoah)

Just about every temple will hire two or three musicians (if there are none in the congregation) to perform this short piece... played at the start of the evening ceremony. Everyone immediately quiets down when the first note is played and for that night and the next day everything is very, very somber and serious.

According to tradition, it is on Yom Kippur that God decides each person's fate, so Jews are encouraged to make amends and ask forgiveness for sins committed during the past year. The holiday is observed with a 24-hour fast and  several special religious services.

While there are six fasting days in Judaism, Yom Kippur is the one day that most (observant) Jews  fast for 24 hours (or attempt it... most don't make it!)... believing that  fasting is a vehicle for reflecting and repenting for one's sins. The other fasting days are considered minor and only the most devout do it.

Yom Kippur comes ten days after Rosh Hashanah, or the start of the Jewish new year. These are called the Days of Awe, where Jews ask God for forgiveness so their name can be enshrined in the book of life. There is nothing more serious in the entire Jewish year (or life) than Yom Kippur. No jokes, no comedy, this is major, major seriousness.

The evening service is a couple of hours. Everyone then goes home but comes back around 9 AM. There are a series of services during the day, each one usually 60 minutes long with a 15 or 20 minute break between them. This goes until about 5 PM when the final service ends and everyone goes into the social hall or outside to a courtyard for a lite meal, served buffet-style by the temple's sisterhood. Many people will skip that and simply go out for a lite dinner or often there are break-the-fast parties. These are not big feasts... because you can't cook (or do any work) over Yom Kippur so everything was made in advance... lots of veggie dishes or cold-cuts... usually still chilled from the fridge. There were always nice cookies and cakes as well.

At the break-the-fast people will walk up to others and say the traditional greeting of the holy days... "L'shanah tovah" (sha-nah toe-vah) ...  which means in English "May you have a good year." People shake hands or hug.

Judaism teaches that because humans have been given free will, they are responsible for their own actions. If they commit an action which is wrong, then they must seek forgiveness. Forgiveness can only be accepted from the victim. Jews place great emphasis on teshuva , meaning repentance.

So I ask you to please sit and listen to the music on Sunday and perhaps ask for your own entry into the Book of Life.